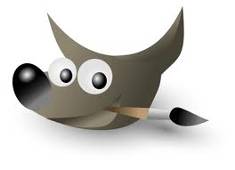 ★更新内容
Added 'Windows→Hide docks' menu item that does what 'Tab' does and also displays its state, which is now persistent across sessions, too.
Added infrastructure allowing to embed user interface elements on the canvas. This is currently used for text styles in the text tool, and (experimentally) when a color correction tool is invoked while the canvas is in full-screen mode.
To make dock window titles manageable, only show the active dockable in the dock window title.
The layer modes have been rearranged into more logical and useful groups based on the effect they have on compositing of a layer. Layer modes that make the composite lighter are in one group, layer modes that make the composite darker in another group, and so forth.
You can now Alt+Click on layers in the Layers dialog to create a selection from it. Add, subtract and intersect modifiers Ctrl, Shift and Ctrl+Shift keys work too. This makes it easy to compose contents of a layer based on the contents of other layers, without detours.
New docks are created at the pointer position.
Removed Toolbox from list of Recently Closed Docks, handle that directly in the Windows menu.
Allow closing the toolbox without closing the whole application.
Default to non-fixed-aspect in Canvas Size dialog.
In the Preferences dialog, only have one setting for the window hint for both the toolbox and the docks.
Support arbitrary affine transforms of brushes.
Got rid of the Tools dockable and move toolbox configuration to Preferences.
A question that often arises is how to change the UI language in GIMP, which has traditionally been a bit cumbersome. Not any longer, it is now possible to change the language in Preferences.
Added 'Lock content' button to the layers, channels and paths dialogs, made the lock buttons more compact.
Allow renaming list items with F2.